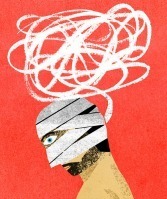 It was 2011 and the Libyan war was at its height. I was working on the border of Libya and Tunisia for the United Nations refugee agency, interviewing refugees from sub-Saharan Africa who had been living in Libya when the war broke out. My job was to recommend who should be resettled in a Western country.

I had spent the last two years doing this work, so horrific stories were not new to me. But the immediacy of war was. People I interviewed in Tunisia had recently fled Libya, the second or third war they’d survived. They had under-treated bullet wounds and desperate, traumatized minds. I was working seven days a week to fulfill the expectations of a humanitarian organization and a people in distress.

A month after I arrived in Tunisia I stopped sleeping. My mind raced, replaying the stories I’d heard, stories of homes burning, mothers wounded, children left behind. From my air-conditioned bedroom I saw the faces of those I’d interviewed that day and wondered if they were lying awake in the sweltering tents, thinking of all they had lost.

Increasingly sleepless, it became harder to pretend that everything was fine. Finally, I realized I needed help.

I emailed a human resources officer asking if mental health support was available. I never heard back. I survived the remaining months of my contract and then left the organization. I spent the next couple of years dealing with recurring insomnia.

It turns out I was not as alone as I’d felt. According to a 2013 studycommissioned by the United Nations High Commissioner for Refugees, 47 percent of its staff members who were surveyed indicated having had sleep problems in the previous month. And 57 percent had recently experienced symptoms consistent with depression. Rates of clinical depression among aid workers are double those of American adults. One cites “adult trauma exposure” as a main cause.

Yet mental health support for the estimated 250,000 humanitarian workers in the trenches is woefully lacking. The United Nations report found that the organization was compliant with just 35 percent of internationally recognized guidelines on providing psychological care to humanitarian staff members. The report recommends that the organization “provide and promote the option for staff to utilize external mental health therapists” and “disseminate information on what is covered by insurance for outside therapeutic support.” It also recommends more than 20 other measures to help aid workers.

While the management formally approved all but one of these recommendations — a solid gesture — nearly two years later many of them remain unfulfilled. One recommendation that has been implemented — that aid workers going to the hardest places, to the Afghanistans, Iraqs and Syrias, will be contacted by an in-house counselor before and after their mission for an optional mental health check-in — is not happening systematically. A close friend who was recently posted to the worst type of duty station, “Category E,” was contacted by one of the organization’s 10 “staff welfare officers” to see if she was interested in such a session. She said she was, but never heard back. She’s currently struggling with insomnia and severe anxiety.

Yet the United Nations refugee agency is better than most, according to Kaz de Jong, head of staff care for the Netherlands division of Doctors Without Borders. His is one of the rare aid organizations known for doing a good job on this front. “At least they’re doing something,” he says, referring to the 2013 report. “Many do nothing at all.”

He’s right. A 2009 survey of 20 aid organizations found that many staff-care programs fail to adhere to basic standards. Little has improved since. What progress has been made often remains at the headquarter level, far from the shelling and violent stories that aid workers regularly face on the front lines.

At the same time, the work itself has become increasingly dangerous, with aid workers more stretched than ever. For the first time since World War II, more than 50 million people are displaced worldwide. Attacks on aid workers more than tripled in the last decade.

Of course, the traumas of aid workers pale in comparison to those they serve. But many do face near-death experiences — 45 percent of those surveyed in the 2013 report had believed their lives were in danger or that they would be seriously injured at least once during their careers. They hear firsthand accounts of rape and murder on a near daily basis. They are usually an ocean away from their families. All while they are expected to fulfill the impossible task of helping to feed, house and protect the world’s growing number of displaced in a world of shrinking humanitarian resources.

De Jong, a psychologist who has been in the humanitarian business for decades, thinks the aid world is failing its staff for two reasons: first, lack of funding. But he admits that many interventions — providing online support and identifying staff willing to speak frankly about their struggles, for example — cost little. More fundamentally, De Jong says, the issue is old-school attitudes about mental health. He says that most humanitarian managers tend to equate psychological support with weakness.

One United Nations employee who was violently assaulted a few years ago while working in a war zone and who continues to suffer from post-traumatic stress as a result, thinks it’s also because so few people know there’s a problem.

“The U.N. and other humanitarian organizations are the ones developing policies on gender sensitivity, human rights, labor law and so on,” she told me. “So people just assume that these organizations are applying the same standards to their staff. But it doesn’t work that way.”

This must change, and not just for high-minded humanitarian reasons. Depressed and anxious aid workers perform poorly. In 2012, psychiatric conditions were the leading cause of missed work among U.N. refugee agency staff members. Statistics don’t exist on the number of people who quit due to burnout, but I personally know at least half a dozen. I am one of them.

Aid workers need to be tough, resilient folks with a high capacity for hardship. But should they remain unaffected after years of sitting across from people like the young Congolese man who told me through choked tears in 2010 how rebels forced him at gunpoint to watch them gang rape and then kill his mother? If such a person exists, is that really who we want doing humanitarian work?

Aid organizations exist to alleviate suffering and maintain and protect human dignity. They should do better at applying these principles to their own staff.

Rosalie Hughes, a freelance journalist, worked for the United Nations refugee agency and other relief organizations in Kenya, Rwanda and other African countries from 2009 to 2013.