This excerpt was originally published on October 27, 2014, in Greater Good, the online magazine of the Greater Good Science Center at UC Berkeley.

Empathy matters for a couple reasons. First, empathy is good for patients. It builds trust, which increases patient satisfaction and compliance. When patients perceive that they connect on common ground with the physician, they have better recovery rates. Second, empathy is good for doctors. According to research, patients seldom verbalize their emotional concerns outright and, when they do, their doctors often do not acknowledge the concerns. Empathy can counteract this issue, help doctors do their job well, and even buffer against physician burnout.
However, we have a long way to go before empathy is properly incorporated into everyday practice. As one article observed, “the culture of medicine and of medical training may be such that empathy is under-valued and under-taught.” A study found that in sixty-nine percent of office appointments, doctors interrupted before patients could finish explaining their health concerns. Moreover, empathy actually declines during medical education.
So how can we address the dearth of empathy in the medical field? While there may be personality traits that are prerequisites for empathy, such as pro-social, non-stereotypic attitudes toward others, the consensus among scholars is that empathy can be taught. Training may include “offering experiences that increase self-awareness, listening skills, awareness of the commonalities of all human beings, and respect and tolerance for the differences” and “teaching humanistic interviewing skills.”
There have already been several successful efforts at teaching empathy to doctors: One communication program led to more empathic expression during interactions with patients. Another approach, online courses called Empathetics, has been shown to be effective at developing empathy in resident physicians.
To learn more about this topic, I sat down with the founder of Empathetics, Dr. Helen Riess, to discuss her innovative work on fostering empathy in the physician-patient relationship and its implications for improving healthcare delivery. Dr. Riess is the director of the Empathy and Relational Science Program at Massachusetts General Hospital, associate professor of psychiatry at Harvard Medical School, and a practicing psychiatrist.

Kasley Killam: How has your work in empathy affected your psychiatry practice?
Helen Riess: It’s really my practice that has affected my work in empathy. Back when I was a psychiatry resident, I was schooled in Self Psychology, which is an approach to psychotherapy developed by Heinz Kohut that emphasizes the importance of feeling understood and feeling that your experience in the world is human and shareable. That training shaped my work with patients. I could clearly see that, although of course you need other techniques, if you don’t have that connection, you don’t get anywhere.

KK: How did you create Empathetics?
HR: The Empathetics company was founded to meet the huge demand for the evidence-based training I developed at Massachusetts General Hospital. A randomized controlled trial demonstrated that this approach significantly improved patient satisfaction scores. The e-courses are a translation of the empathy training that I delivered to hundreds of doctors. I studied the neuroscience of empathy for several years and what I learned was how humans perceive the emotions of others and how they respond best.

KK: Is empathy always beneficial for the physician-patient relationship or could there be negative outcomes associated with physician empathy?
HR: The answer is yes: there can be too much affective or emotional empathy. Affective empathy is the emotional resonance people feel for another person’s pain or situation [akin to sympathy]. This often leads to prosocial behavior, but it can also lead to misguided decisions. In contrast, cognitive empathy is understanding what the person feels and thinks, regardless of whether you have been in the exact same situation or whether you feel the person’s emotions. Our role as physicians is to get under the patient’s skin and see the world from their point of view, but also to get back out so that we can be objective and make the best rational decision. 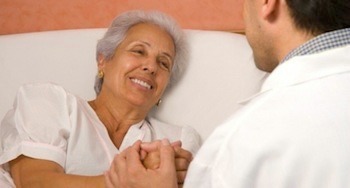 For example, you could have a patient who is really afraid of needles and doesn’t want to get a tetanus shot. If you empathize too much with that emotional fear, you might decide, “Don’t have the shot, because I can see how distressed you are.” But once you get back out into your physician role, you realize instead, “I need to help you overcome the fear, because it’d be much worse for you to get tetanus.” For doctors in training, too much affective empathy can sometimes distract them from the difficult work they have to do. If you’re too worried about hurting the patient, you might not learn the procedure. That’s why, in most cases, empathy gets somewhat blunted during medical school. You’ve got to employ and preserve cognitive empathy, even when affective empathy may decline, so that you can actually learn the things that are going to help patients.

KK: In the example of a patient who is afraid of needles, how could you use empathy to help the patient feel at ease, while still doing what you need to do?
HR: It’s a matter of reframing it. You could say, “I know you really don’t like needles, and if I could do anything to make this not hurt, I would. I’m going to put some alcohol on your skin and ask you to count to ten out loud, and I’m going to try to make this as fast as possible.” In that way, you let them know that you’re trying to work with the fear. You acknowledge it and then use distraction.

KK: How can family doctors be empathic when they barely have 15 minutes with each patient?
HR: Just because you are in a rush doesn’t mean you have to act as if you’re in a rush. You can know that you have 15 minutes but still sit down—which makes you much more connected to the person than if you’re standing up—and make good eye contact, nod your head, lean in. All these habits convey that you are present. The worst thing you can do is walk to the door, put your hand on the door handle, and keep talking, because then the person knows that half your mind is already where you’re about to go. Instead, stay seated and say, “If you have another brief question, I can answer it now, and if you’d like more time to go over things, let’s schedule another appointment.” That way, you’re completely with the patient, but you’re not trying to cram ten pounds of flour into a five-pound bag.

KK: In a discussion with Jodi Halpern, who studies clinical empathy at UC Berkeley, you mentioned that nowadays doctors don’t have a chance to recover from medical school, so any burnout or reduction in empathy carries over into their clinical practice. How do you think we can address this issue?
HR: I think we have to bring more humanity back into medical education. The pendulum has begun to swing that way with the restriction on the number of hours doctors are allowed to be on duty. We used to have to stay up all night in the emergency room and then spend the next day doing psychotherapy with people. We would literally be pinching ourselves to stay awake. What was the point of that? So I think the duty hour restriction is a step in the right direction.
But we still need to challenge the more-work-and-no-play mentality and promote better self-care if we want people to keep having the capacity to give. You can’t draw from a dry well, and I think that’s a huge problem in the way medicine has changed over time. There’s more documentation, there’s more computer use, and there’s less of the valuable time spent talking with patients. Because of that, the work has encroached on people’s lives. I’ve talked to some older physicians who say that they go home and write their notes there, because they want to maximize time with their patients at the office. So they basically end up working all day and at night. That’s not sustainable. I think the way to be a good doctor for the longest period of time is to practice self-care. If people are meeting their own needs, they’re better equipped to meet the needs of their patients.”

KK: Moving forward, what are you most excited about?
HR: Most of all, I’m excited about the word getting out—empathy can be taught—and about people realizing that they need it in whatever community or profession they’re in. I think the world needs to move away from a self-centered, survival-of-the-fittest, there’s-not-enough-to-go-around scarcity mentality, which causes people to not share and to not regard the other person. It’s not working as a society. So I think it’s pretty exciting that there are so many people looking at it and trying to do something about it.

About The Author
Kasley Killam is helping to coordinate InciteHealth, a catalyst for healthcare innovation at Harvard Medical School that aims to improve physician-patient communication and address other topics in primary care. She’s also doing research on empathy and intergroup conflict in the Harvard psychology department, designing a technology campaign on compassion, and launching an app on social connection. Follow her on Twitter at @KasleyKillam. The author is not affiliated with Dr. Riess or Empathetics.