Economists have long assumed that people act in their own best interest when making decisions. But research in behavioral economics and psychology has called that assumption into question, showing the many ways that moral sentiments and altruism also play a role in human behavior.

In The Moral Economy: Why Good Incentives Are No Substitute for Good Citizens, author Samuel Bowles argues that most economists are way behind the curve in understanding what motivates people to behave honestly, fairly, and generously in economic interactions. Bowles, a behavioral economist at the Santa Fe Institute, reveals fascinating new research on economic decision making and encourages us to rethink the ways we design our workplaces and our communities.

How incentives affect our behavior 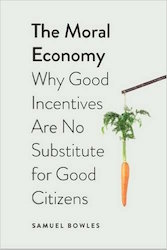 Bowles provides ample evidence in his authoritative book that the model of Homo economicus doesn’t bear out in real life. For example, in one study, when preschools instituted a fine for every minute parents were late in picking up their kids, parents responded by being late more often, not less. In another study, toddlers who had avidly and spontaneously helped someone in need helped less when given a toy as a reward.

Bowles suggests that incentives like these—rewards and punishments—often fail because they send an unintended message. In the first case, imposing fines for lateness implied that lateness was expected and okay, as long as parents paid; in the second case, rewards sent the message that altruism is something you do for reward, not because it’s inherently gratifying. Incentives can overwhelm people’s good intentions, says Bowles, leading to unexpected outcomes.

“Motives such as reciprocity, generosity, and trust are common, and these preferences may be crowded out by the use of explicit incentives,” he writes. People behave differently than one might expect from economic theories of human nature.

Incentives may cause people to think in terms of cost-benefit calculations, rather than acting on natural goodwill. In one study, participant “investors” were given the opportunity to transfer money to “trustees,” who then received triple that amount and could give some back to investors. When trustees were told that investors could impose a fine if they didn’t return part of the gift, the trustee actually gave back less to the investor. In other words, imposing punishments to prevent the participants from being self-interested served only to crowd out their natural generous instincts. In addition, if the investor declined the right to impose a fine, and the trustee was aware of that choice, the trustee appreciatively gave back more to the investor than in the initial scenario.

“The experiments show that policies premised on the belief that citizens or employees are entirely self-interested often induce people to act exactly that way [self-interested],” writes Bowles.

Another way that market incentives might undermine morality is by encouraging a sense of distance and anonymity. In one experiment, people were entrusted with the care of a cute mouse. They were then shown a disturbing video of a mouse being gassed to death, and either offered payment to let their pet mouse be gassed or told they could sell their mouse to another student, who would allow it to be killed.

Forty-six percent would not let their mouse be killed in the first group, but 72 percent would in the second. The experimenters discovered that to get 72 percent of people in the first group to gas their mice, they would have to offer almost five times as much money—“a measure of the moral disengagement created by the market setting,” writes Bowles.

The role of social norms

Still, this is not the whole story—incentives are not always bad, and we can’t dismiss the fact that some people will act in self-serving ways if given the chance. So, what does nudge people toward the most socially desirable behaviors—like generosity, cooperation, trust, and fairness?

Beyond a focus on incentives, which are situation-dependent, Bowles points to the importance of societal norms around fairness and trust. These, he believes, are best nurtured by a society “characterized by extensive reliance on markets to allocate economic goods and services, formal equality of political rights, the rule of law, public tolerance, and few barriers to occupational and geographic mobility based on race, religion, or other accidents of birth.”

Though measuring the direct influences of societal norms can be complicated, he points to results from some of his own interesting cross-cultural research implying that when the right norms are in place, moral behavior is less impacted by incentives and more part of a person’s everyday habits.

In this study, participants from societies exposed to a market system (such as farmers in rural Missouri) made significantly more generous offers to other players in the Ultimatum Gamethan participants from more market-isolated communities (such as hunter-gatherers in Hadza, Tanzania).

Similarly, in another game where ungenerous players could be punished, participants from cultures defined by a healthy rule of law, democracy, individualism, and social equality values (such as Melbourne, Boston, and Zurich) tended to hand out fewer antisocial punishments—punishments aimed at highly generous players, not just ungenerous players—than those without these social norms and institutions (such as Seoul, Riyadh, and Minsk).

“A plausible explanation of the more generous and fair-minded experimental behavior seen in the more market-oriented societies…is that people learn from their market experiences that fair dealing with strangers is often profitable,” he writes.

Taken together, these experiments and others in Bowles’s book suggest that creating good economic policies isn’t simple and can’t be based on theories of self-interest alone. His message—perhaps primarily aimed at economists though relevant to all—is clear: If we can figure out what policies and incentives nudge people toward generosity and fairness and away from cheating, we will no doubt create a better society for everyone. Bowles’s book is a plea to take on that challenge.

“I do not know whether an approach…adequate to this challenge can be developed,” he writes. “But we have little choice but to try.”

Jill Suttie, Psy.D., is Greater Good‘s book review editor and a frequent contributor to the magazine.