This article is derived from a talk given by Richard Davidson, neuroscientist and founder at the Center for Healthy Minds at the University of Wisconsin-Madison, at the Greater Good Science Center’s Mindfulness & Well-Being at Work conference.

Based on our research, well-being has four constituents that have each received serious scientific attention. Each of these four is rooted in neural circuits, and each of these neural circuits exhibits plasticity—so we know that if we exercise these circuits, they will strengthen. Practicing these four skills can provide the substrate for enduring change, which can help to promote higher levels of well-being in our lives. 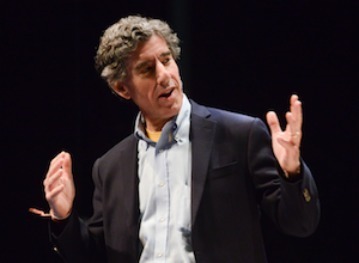 To paraphrase the bumper sticker, stuff happens. We cannot buffer ourselves from that stuff, but we can change the way we respond to it.

Resilience is the rapidity with which we recover from adversity; some people recover slowly and other people recover more quickly. We know that individuals who show a more rapid recovery in certain key neural circuits have higher levels of well-being. They are protected in many ways from the adverse consequences of life’s slings and arrows.

Recent research that we’ve conducted in our lab at the University of Wisconsin-Madison—very new work that’s not yet published—asked whether these specific brain circuits can be altered by regular practice in simple mindfulness meditation.

The answer is yes—but you need several thousand hours of practice before you see real change. Unlike the other constituents of well-being, it takes a while to improve your resilience. It’s not something that is going to happen quickly—but this insight can still motivate and inspire us to keep meditating.

Even individuals who suffer from depression show activation in the brain circuit underlying outlook, but in them, it doesn’t last—it’s very transient. Here, unlike with resilience, research indicates that simple practices of lovingkindness and compassion meditation may alter this circuitry quite quickly, after a very, very modest dose of practice.

We published a study in 2013 where individuals who had never meditated before were randomly assigned to one of two groups. One group received a secular form of compassion training and the other received cognitive reappraisal training, an emotion-regulation strategy that comes from cognitive therapy. We scanned people’s brains before and after two weeks of training, and we found that in the compassion group, brain circuits that are important for this positive outlook were strengthened. After just seven hours—30 minutes of practice a day for two weeks—we not only saw changes in the brain, but these changes also predicted kind and helpful behavior.

The third building-block of well-being may surprise you. It’s attention.

To paraphrase the title of a very important paper that was published several years ago by a group of social psychologists at Harvard, “A wandering mind is an unhappy mind.” In this particular study, researchers used smartphones to query people as they were out and about in the real world, essentially asking three questions:

Across a large group of adults in America, researchers found that people spend an average of 47 percent of their waking life not paying attention to what they’re doing. Forty-seven percent of the time!

Can you envision a world where that number goes down a little, by even 5 percent? Imagine what impact that might have on productivity, on showing up, on being present with another person and deeply listening.

This quality of attention is so fundamentally important that William James, in his very famous two-volume tome The Principles of Psychology, has a whole chapter on attention. He said that the ability to voluntarily bring back a wandering attention over and over again is the very root of judgment, character, and will. And he went on to say that an education that sharpens attention would be education par excellence. But, he continues, it is easier to define this ideal than to give practical directions for bringing it about. Today, we have practical steps for educating attention. And I think if James had had more contact with contemplative practices, he would have instantaneously seen these as vehicles for educating attention.

Join us for a conversation
between Dr. Richard Davidson and Lama Tsomo

On April 26, 2016, the GGSC is
hosting "Take 10 Minutes, Change
the World: A Conversation
Between Richard Davidson, Ph.D., and Lama Tsomo." Register now!

There are now a plethora of data showing that when individuals engage in generous and altruistic behavior, they actually activate circuits in the brain that are key to fostering well-being. These circuits get activated in a way that is more enduring than the way we respond to other positive incentives, such as winning a game or earning a prize.

Human beings come into the world with innate, basic goodness. When we engage in practices that are designed to cultivate kindness and compassion, we’re not actually creating something de novo—we’re not actually creating something that didn’t already exist. What we’re doing is recognizing, strengthening, and nurturing a quality that was there from the outset.

Our brains are constantly being shaped wittingly or unwittingly—most of the time unwittingly. Through the intentional shaping of our minds, we can shape our brains in ways that would enable these four fundamental constituents of well-being to be strengthened. In that way, we can take responsibility for our own minds.

About The Author
Richard J. Davidson is the William James and Vilas Professor of Psychology and Psychiatry, Director of the Waisman Laboratory for Brain Imaging and Behavior and the Laboratory for Affective Neuroscience, and Founder and Chair of the Center for Investigating Healthy Minds at the Waisman Center, University of Wisconsin-Madison. He is the author of The Emotional Life of Your Brain and The Mind’s Own Physician. He blogs at http://richardjdavidson.com.